World-class sound in a pair of earbuds

RE2000 provides some of the most engaging and detailed sound I’ve heard out of any audio product – full-size headphones and speakers included.

You’d be forgiven for not having heard of Hifiman before. The headphone company has flourished almost entirely within the audiophile community, producing everything from value-oriented cans to ludicrously expensive examples of audiophile excess.

The product I’m writing about today leans towards the latter. The Hifiman RE2000 are the company’s flagship earbuds – properly known as IEMs or in-ear monitors – designed with one goal in mind: provide the best sound quality in an earbud, cost being no object.

I won’t assert Hifiman totally succeeded because I haven’t heard all the competition; despite the death of the headphone jack, the audiophile IEM market is more saturated than ever. I will say the RE2000 provides some of the most engaging and detailed sound I’ve heard out of any audio product – full-size headphones and speakers included.

One would hope so, given the price. At launch, it came in a gold-plated brass design and retailed for $2,000. Believe it or not, there are far more expensive IEMs out there, but that’s still a huge wad of cash for any normal person to drop. 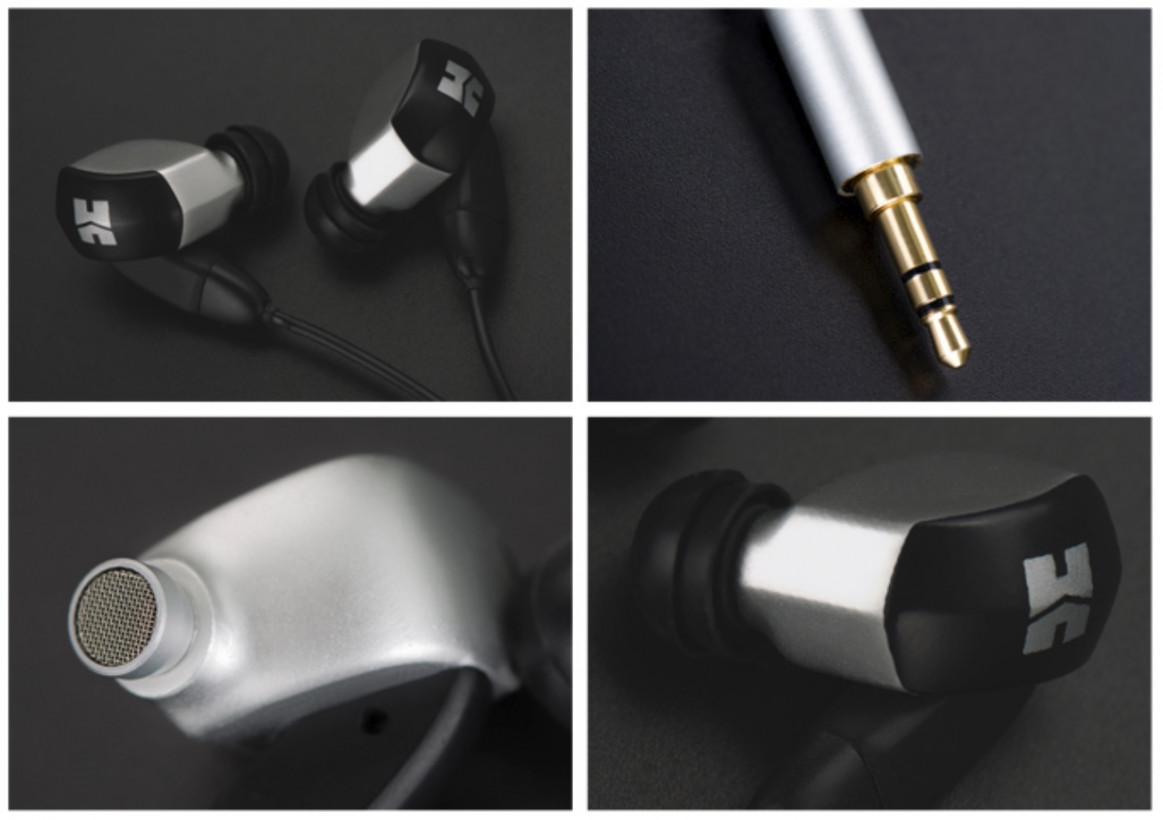 Thankfully, the company released a ‘Silver’ model (with aluminum instead of brass) that purportedly sounds the same but retails for $1,500. Both models can be found for cheaper nowadays, and better yet, Hifiman is currently running a holiday sale for ‘just’ $800. Among other top-of-the-line, endgame-level IEMs, that’s quite a steal.

It’s a pity they don’t quite like look their price. Don’t get me wrong, the RE2000 Silver seem well-built, but their metal and plastic design doesn’t exude the premium allure of other audiophile flagships. The cubic zirconium build of RHA’s CL2 or classy metal finishes of Campfire Audio’s Atlas and Andromeda – all cheaper than the RE2000 Silver at launch – make the Hifiman look cheap in comparison. 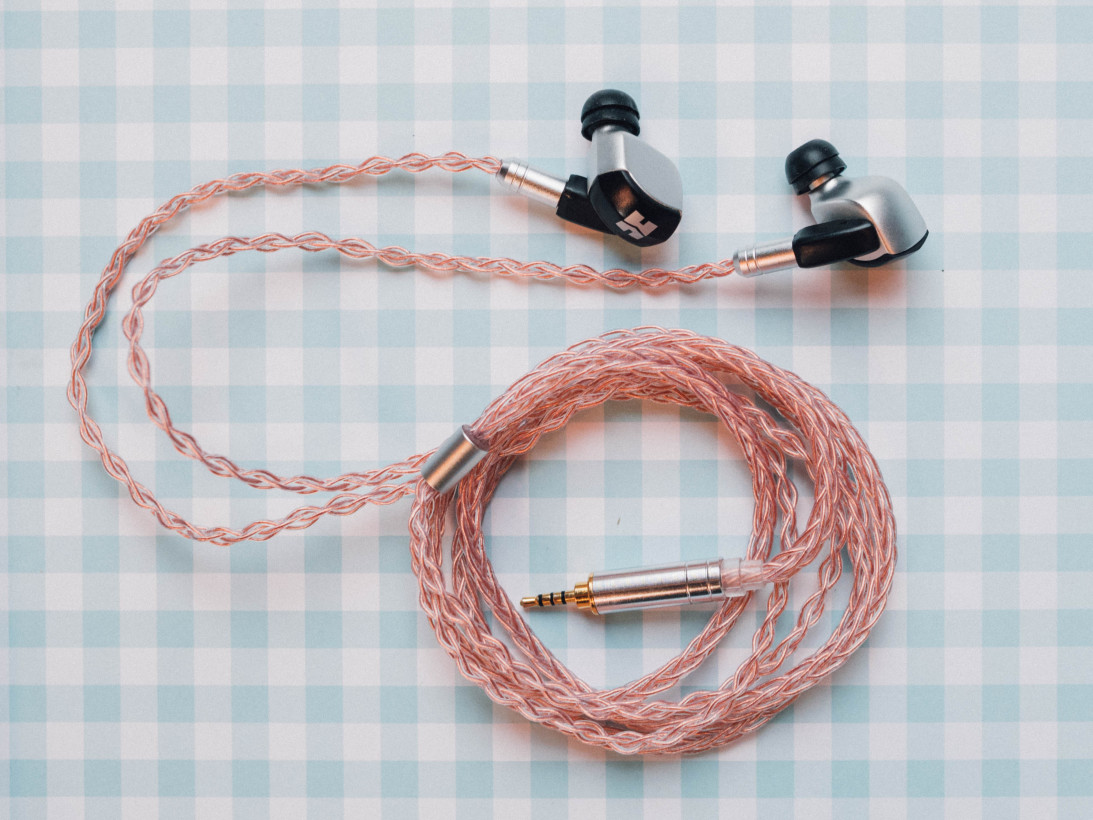 The same goes for the detachable cable. It’s fine, but it doesn’t give off the indestructible and tangle-free quality seen with other headphones. I don’t believe that cables affect sound quality significantly if at all, but you can at least get something that feels nicer from Amazon for about 30 bucks.

I’m conflicted about the RE2000’s form factor. While smaller, lighter, and more comfortable than many competing products, there’s one sharp corner that can be annoying if you have small ears (although it didn’t bother me and the headphones can be worn in different orientations). Moreover, a short nozzle means you might need to use larger tips than usual to get a consistent seal. That would be fine, except Hifiman doesn’t include the usual set of small, medium, and large sizes, instead opting for a variety of tip shapes.

The default tips were just a touch too small, and the RE2000 is already only average at blocking out sound (for IEMs), so I had to resort to the scary-looking triple-flanges (see below). Those block out enough noise for commuting but are uncomfortable for extended use. I’d recommend buying some extra tips – Spiral Dot, Spinfit, Symbio and Comply tips are some audiophile standards. 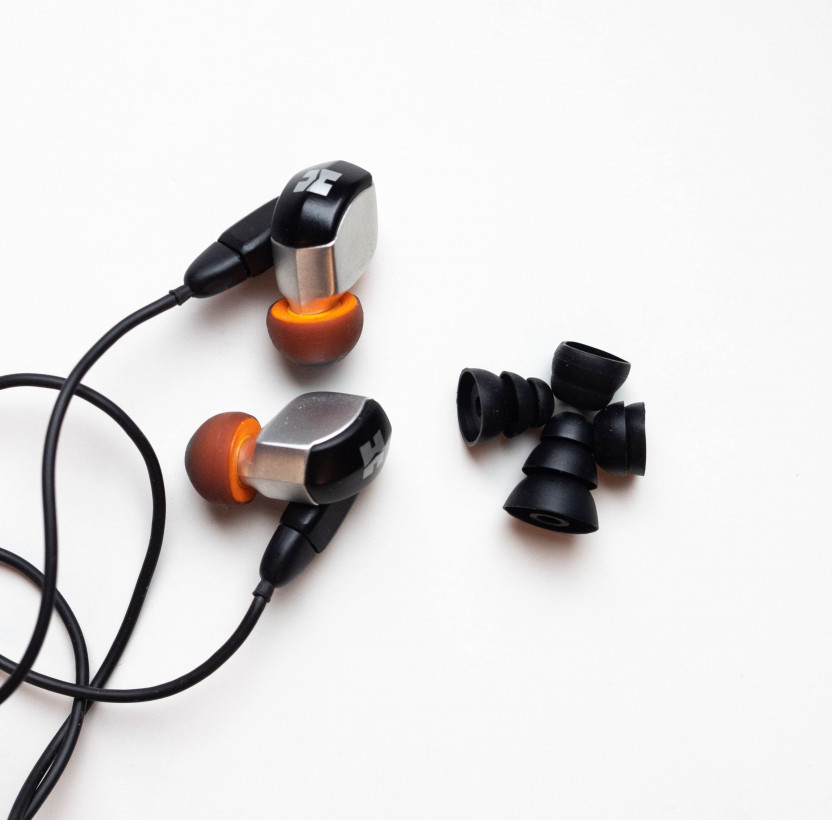 Once I got a good fit, the RE2000 was snug enough to wear to sleep – which is great, because I want to listen to them all day and night. These headphones sound glorious.

Hifiman’s founder, Dr. Fang Bian, says the RE2000 took three years of research to create. In fact, you could say it goes back further. The unique ‘Topology’ diaphragm in the RE2000 is based on his Ph.D. thesis: it reduces distortion by applying a special nanoparticle coating in layers of geometric patterns. 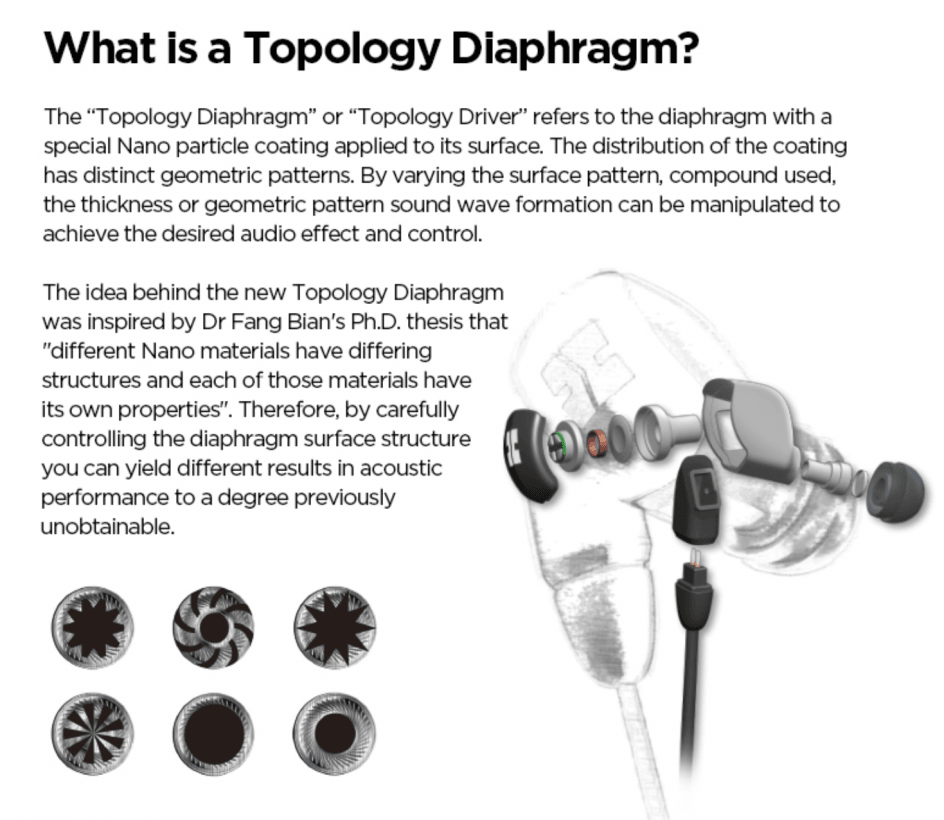 This is particularly notable because very few IEMs in this price and performance bracket use a single dynamic driver per ear. More commonly, you’ll see anything from three to twelve tiny speakers – usually of the balanced armature variety, or a combination of dynamic and balanced – stuffed into each side. The RE2000 apparently doesn’t need that, as according to Hifiman the sound from its single driver is more natural and engaging.

The company makes a good case for itself. The first thing that hits you about the RE2000’s sound is its grandeur, its flat-out bigness. Despite being crammed into your ear canals, the RE2000 gives off a sense of space that can almost fool you into thinking you’re listening to far larger headphones. There’s ample width to the soundstage, but there’s also a fair bit of depth and height that doesn’t leave me wanting for my full-sized cans. Instruments get space to breathe that’s rare for IEMs.

This is all aided by Hifiman’s highly-agreeable tuning. It’s a slight V-shape, meaning there’s a small emphasis on the bass and highs over the mids. This is my preferred tuning, and it’s one that should be friendly to anyone transitioning from more mainstream products. I’m happy to see more high-end headphones dismissing the trope that flat or bright tuning is necessarily more “realistic.” Different strokes for different folks. 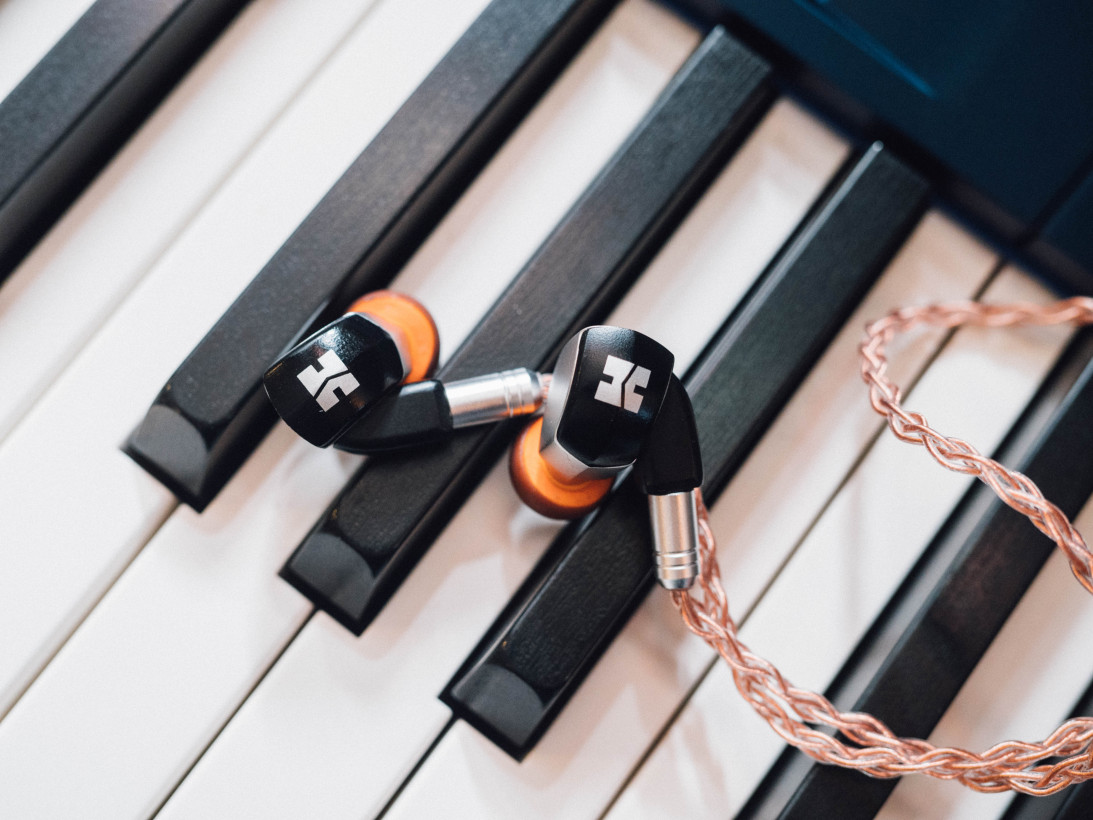 The bass is a highlight, hitting like a truck when called for without the slightest hint of boominess. It’s this region that tends to give it an advantage over more common multi-driver IEMs, sounding a bit more weighty and natural than the clinical. There’s a bit of an emphasis on the midbass to make music engaging, but it still reaches deep into the sub-bass and doesn’t muddy up the mids. It’s not the deepest I’ve heard, but plenty to shake your noggin.

The midrange is surprisingly refined, given the V tuning. It’s slightly recessed behind the other frequencies, so vocalists aren’t all up in your face, but all the detail, texture, and grit is there. The RE2000 has the kind of timbre that makes strings sing, with vocals coming across as natural and realistic.

The treble, meanwhile, is masterfully tuned to provide ample detail and sparkle without ever sounding harsh or aggressive – except for in bad recordings. Still, the RE2000 are overall fairly forgiving headphones. Unlike headphones tuned more analytically, the RE2000 will politely point out the flaws in poorly mastered tracks without making you hate some of your favorite music.

To be clear, the RE2000 isn’t the most technically proficient headphone I’ve heard. RHA’s CL2 resolves more minutiae to my ears, as do some flagship full-size headphones. No part of the frequency range is the very best I’ve heard. There’s only so much a single dynamic driver can do, especially when Hifiman’s tuning doesn’t artificially inflate a sense of resolution with abrasive highs. 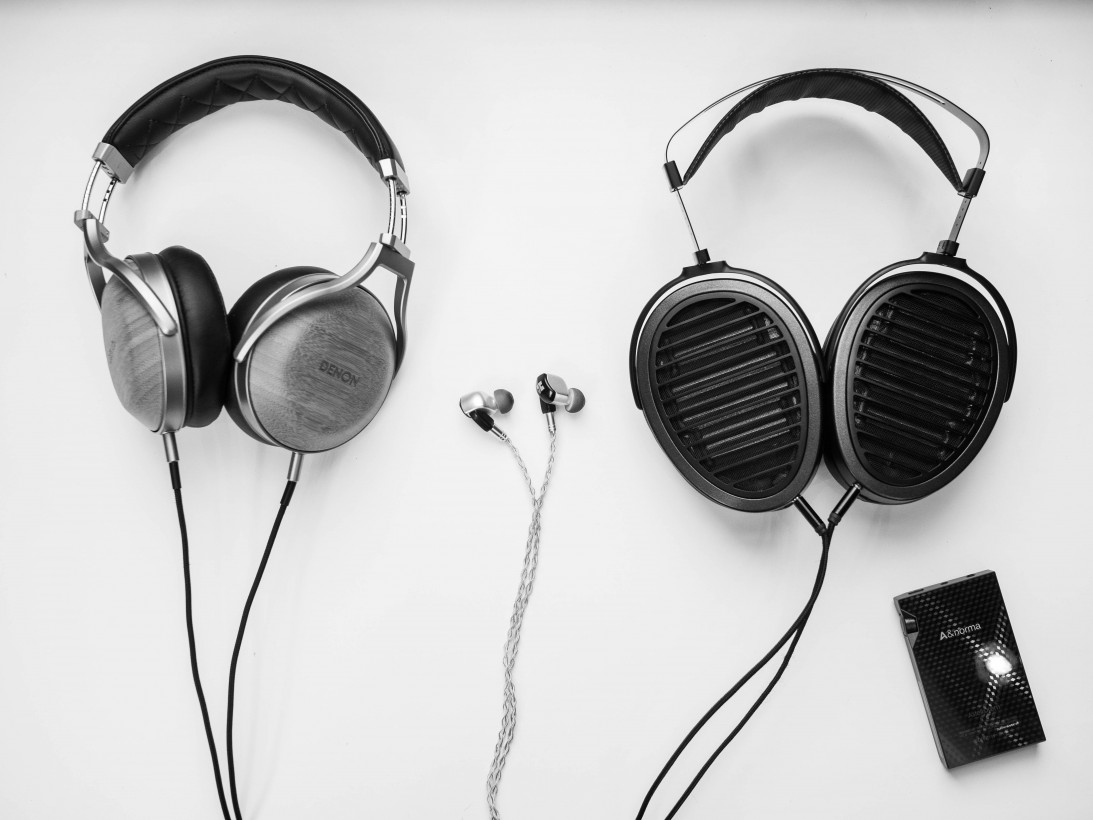 Admittedly, most of my experience with IEMs is below $300, after which diminishing returns set in fast. The Fiio FH5 and A&K Billie Jean are a couple of great options in that price tier, but it is clear these are a league above. Among more expensive IEMs, RHA’S $899 CL2 can beat the RE2000 in detail, comfort, and isolation, but I enjoy Hifiman’s tuning and presentation more.

Within this price range and beyond, I have more experience with full-size headphones, and the RE2000 absolutely compete. To my ear, they’re pretty darn close to Sennheiser’s HD820 for pure sound quality and resolution but have a much more enjoyable tuning. They’re less detailed than the Focal Utopia, but it’s wild they exhibit a similar sense of space.

The one headphone I’m enjoying similarly, perhaps not surprisingly, is Hifiman’s new $1,699 Arya – which is tuned very similarly but provides more detail and the extra sense of space of full-sized cans. Maybe I just really dig Hifiman’s current house sound, but I suspect a lot of audiophile newcomers would too.

$1,500 is a lot to spend on a pair of earbuds (though again, they’re on sale for $800 right now), and I wish the fit and finish were a bit more refined for the price. But sound-wise, this is endgame-level stuff.

Audiophiles who have been following the high-end IEM market will know four-digit pricing is far from unusual – but I imagine many other readers will be wondering why someone would spend so much on a pair of earbuds. For me, it comes down to versatility.

Fewer people bat an eye when someone spends that much cash on fancy full-size headphones or speakers. Heck, people spend thousands on fancy watches, jewelry, clothing, vehicle upgrades, and whatnot. But to me, a great IEM like the RE2000 gives you more for your money. It’s something you use every day, something that gives you the great pleasure of taking some of the best sound in the world almost anywhere in the world – to the gym, on an airplane, in a crowded subway.

Whether you’re willing to pay for that is totally up to you. All I know is I’ve found myself reaching for the RE2000 more than almost any other headphone I’ve tested in recent memory. That I can carry such world-class sound within my pocket is nothing but a small wonder.