Without a doubt, sound tuning, build quality, and ergonomics of the design play a very important role in overall value of headphones. But in today's competitive market filled with a number of "giant killers", price plays a significant role as well. I wouldn't call RE600 a "giant killer", but in its new price range of $199 these are among the best neutrally tuned revealing headphones I had a pleasure to test.

Cons: would rather take a premium headphone case over premium packaging.

Before I start my review, I would like to Thank HiFiMAN for providing me with a review sample in exchange for my honest opinion.

Also, my assessment and rating of their value is based on the recently updated pricing, reduced down to $199. 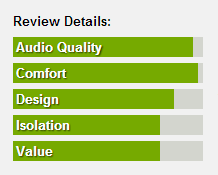 HiFiMAN (HFM) doesn’t need any special introduction.  They are among a better known and highly regarded companies in audio industry, while their founder and CEO, Dr Fang Bian, gets an attention of a rockstar whenever he attends CanJam, Head-fi meets, or any other audio trade shows.  He pioneered and patented a lot of new technologies related to planar magnetic headphones, and also well known in a field of portable in-ear monitors and audiophile grade DAPs.

Usually I review new headphone releases, but decided to make an exception in this case.  When RE600 “Songbird” model was released 2 years ago, it received a lot of attention and praises, but with introduction price of $400 it was a tough pill to swallow.  Perhaps its price was reasonable at the release time, but market quickly caught up and got saturated with other quality IEMs at cheaper prices.  To stay competitive in this IEM market, HiFiMAN reduced that introductory price down to $199 which makes it a much better value considering what it has to offer.  I can only hope they will do the same with HE1000 down the road, but this is about RE600, so let me proceed with my review.

Appropriate for its flagship status, RE600 arrived in a very luxurious packaging.  There was no typical carton box with flashy images or a detailed spec.  Instead I found a leather box (synthetic leather) that opens up on both sides by lifting magnetic flaps to reveal RE600 and some of the included accessories.  The rest of the accessories were placed in a separate small round zippered headphone case because there were no room left in a “leather” box.  Once the cover flaps are up, you can see a jewelry box setting with RE600 on one side of a display, and a selection of eartips inside of their individual cutouts on the other side.

To be honest, as much as I enjoyed the look and the unboxing of this premium packaging, I found it to be a bit too impractical because most of the people are not going to store RE600 back inside and would rather prefer a premium headphone case for daily use.  The presentation was “like a box of chocolate”, but eartips were hard to remove and I was using headphone plug to dig them out.  I definitely appreciate the effort, but a quality storage case instead of included cheap generic one would have been a better option.

In addition to the mentioned above eartips, you also get 10 stick on replacement filters for the nozzle opening, a cable management system where you can wrap around headphone cord for a storage purpose (though, I wouldn’t recommend using it to prevent a wire memory effect), a small round zippered headphone case (basic cheap case, but does the job and great for IEM storage), and a balanced to single ended cable adapter.

3.5mm balanced wired to 3.5mm single ended adapter, is required for use with DAPs and other audio sources that are not compatible with RE600 balanced wired TRRS headphone connector.  Songbirds have 2 independent wire connections from each driver going all the way down to TRRS headphone connector, keeping all the wires separate.  With an included adapter it ties up two negative connections to a common ground, keeping positive L/R signals separate for a standard TRS connection.  But if your source's headphone output supports balanced wired TRRS jack, you can drive RE600 with a benefit of improved L/R separation and a better soundstage control.

When it comes to an exterior design, RE600 looks almost the same as RE400/B.  The shape of the shells are nearly identical with the only difference of RE400 having a brushed aluminum surface while RE600 has a more premium smooth and shiny black finish.  Shells itself are super lightweight, about 13.5g, and nearly disappear in your ears, of course depending on selected eartips.   Unlike other IEMs with a mesh cover to protect a nozzle opening, HFM uses a cloth stick on filter to keep wax and dust away from the driver, and perhaps to add some acoustic filtering.  I have used these stick on filters with a few of my other IEMs in the past, and they can slightly smooth out the top end harshness if you layer a few on top of each other (they stick on really well).  Also, shells have a pinhole vent opening next to a very sturdy extended strain relief.

Strain relief has L/R side marking in clear white letters, and Left side has an ID bump (though very shallow) to distinguish the sides by sliding your finger without looking at the label (shells are identical otherwise).  The section of the cable coming out of the shells after y-splitter is soft and flexible, with a nice smooth rubbery shielding.  Y-splitter is compact and plasticy, no strain relief on either sides, and also there is a nice chin slider to go along with it.  Going down to a straight gold-plated connector with a rubbery housing and a nice strain relief, this portion of the wire has a fine braided cloth sheathing cable.  It was a good decision to use this shielding only prior to y-splitter where you want more durability, but not going up to the shells where you want to reduce microphonics.  I already mentioned about Balanced to SE cable adapter.  I have no issue using TRRS connector with some of my DAPs (non-balanced HO), and the adapter takes care of the rest, plus adds a benefit of an angled connector.

Another important info about RE600 cable is their use of a silver-plated wiring.  A lot of people buy IEMs with removable cables to have an upgrade option where silver-plated quality wiring is one of the popular choices.  Though RE600 cable is not removable, you get an instant upgrade to a higher quality wires.  All this adds up to a very attractive value considering updated pricing of $199.

With a fitment I'm sure many will prefer a wire down option, but if you need an extra security - wire up over the ear works too.  The size of the shell is very small, and depending on the size of eartips you most comfortable with, you can make them disappear in your ears.  In my case, I prefer large size eartips due to a size of my ear canal, so they make RE600 stick out of my ears a bit.  But with small double flange tips you can jam them deep enough where you can lie down with your ear on the pillow and won't feel a thing.

Fitment w/wire up and down (sorry, had a bad hair day :))

Now, here is the most important part of the review, sound analysis.  After an extended listening, I found RE600 to have neutral transparent signature with a very impressive retrieval of details, excellent  separation of sounds with a nice layering effect, and a great airy soundstage which is definitely above the average.  Once you move to a balanced wired headphone connection, you can definitely hear an improvement in staging relative to width/depth - not necessary a huge step up, but enough to notice it.

In more details, bass is tight, punchy, very accurate, with a nice quality extension down to sub-bass, but at the same time not exaggerated or enhanced (we are talking quality, not quantity).  RE600 has fast punchy mid-bass, also without any boost.  Bass has a surgically clean separation from lower mids.

Lower mids are not too thin or too thick, and upper mids have micro-detailed quality without analytical harshness or offending peaks.  Typically a neutral tuning could be a bit bland, but here HFM managed to keep sound exciting and fresh.  Vocals do lack a bit of body and warmth, but it's expected since RE600 are clearly not for those who crave lush smooth sound.

Treble is crisp, sparkly, with a nice extension, good sense of airiness, and zero sibilance.  Especially with silver-plated wires that typically brighten the sound, I was a bit worried about getting closer to the sibilance threshold, but can reassure you they are great for extended listening.

While listening to RE600, in the back of my mind I was constantly comparing them to RE400 which is still regarded by a lot of audio enthusiast as a neutral reference.  RE600 actually refined that signature, taking it to a whole new level.

In a more detailed comparison, RE400B (using balanced version for a better a/b reference) is slightly warmer, has a little more sub-bass, low end is slightly less articulate, mids a slightly more recessed in comparison, and it's definitely not on the same level of detail retrieval, as well as having a little smoother treble with less airiness.  Some of the changes could possibly be due to an upgraded cable since silver-plated wires make sound brighter, but RE600 retrieval of details and transparency level is definitely superior.

Another comparison I found to be VERY appropriate was with SoundMagic E80 because of a very similar neutral-balanced tonality, though E80 has a slightly more mid-forward signature.  What I found is that RE600 takes the best of E80 and scales it up a bit with a tighter more articulate bass, improved retrieval of details, more sparkle/airiness in treble, and overall wider soundstage.  Improvement is noticeable upon a closer listening, but not exactly night'n'day, which actually reinforces E80 value.  I would actually position E80 above RE400 and below RE600.

It's quite interesting for me that I'm looking in this review at a pair of  2 year old IEMs, but now they have a more attractive appeal due to their 1/2 price reduction.  Without a doubt, sound tuning, build quality, and ergonomics of the design play a very important role in overall value of headphones.  But in today's competitive market filled with a number of "giant killers", price plays a significant role as well.  I wouldn't call RE600 a "giant killer", but in its new price range of $199 these are among the best neutrally tuned revealing headphones I had a pleasure to test.  If you are on a budget, E80 makes a great alternative at 1/3 of RE600 price, but if you want to squeeze every ounce of the performance and striving for the best - RE600 is a strong contender.